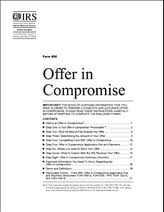 Recently, The Internal Revenue Service announced that they are offering more flexible terms to its Offer in Compromise (OIC) program that will enable some of the most financially distressed taxpayers to clear up their tax problems and in many cases more quickly than in the past.
It focuses on the financial analysis used to determine which taxpayers qualify for an OIC. This announcement also enables some taxpayers to resolve their tax problems in as little as two years compared to four or five years in the past.

In general, an OIC is an agreement between a taxpayer and the IRS that settles the taxpayer’s tax liabilities for less than the full amount owed. An OIC is generally not accepted if according to the IRS’s standards (and this certainly may not be commensurate with your standards), they believe the liability can be paid in full as a lump sum or through a payment agreement. The IRS looks at the taxpayer’s income and assets, as well as certain expenses that are subject to limitations, in order to make a determination of the taxpayer’s reasonable collection potential. These OICs are subject to acceptance on legal requirements.

With the new rules, the IRS will now consider significantly less future income in their calculations,  Additionally equity in income producing assets will generally not be included in the calculation of reasonable collection potential for on-going businesses.

The “Allowable Living Expense” standards of the IRS are used in cases requiring their financial analysis to determine a taxpayer’s ability to pay.  The National Standard miscellaneous allowance has been expanded to include additional items such as credit card payments and bank fees and charges.

Guidance has also been clarified to allow payments for federally guaranteed loans for post-high school education. In addition, payments for delinquent state and local taxes may be allowed based on percentage basis of tax owed to the state and IRS

This now opens the doors to many more taxpayers to be able to get their Offer In Compromise accepted!  If you owe significant back taxes to the IRS, call or email us for a no-fee, no obligation consultation to ascertain if you would be a candidate for an Offer In Compromise.  We have a tremendous, near perfect success rate with our Offer In Compromise cases.  You can email us at: info@irstaxproblems.com, or call us at 201-947-8081 –or 646-688-2807 .

This entry was posted in Offer In Compromise. Bookmark the permalink.